Here is an ATV safety checklist that was published by UC Davis. ATVs are one of the most dangerous vehicles on farms, and many of the injuries and fatalities happen to children. Often, kids and teenagers are injured when they are riding for fun and not when they are doing farm work. They ride too fast on terrain where ATVs should not be used such as steep slopes and on roads. Using an ATV that is too big for the rider also causes problems because children do not have enough body mass to lean and balance out the weight of an adult-sized ATV. Smaller adults might also want to consider a smaller model.

Another thing that helps prevent ATV injuries is helmet use. It’s important that riders wear the correct size helmet, and that helmets are replaced if they experience even a small impact. You can also consider adding a roll bar. Like with tractors, many ATV fatalities happen when the vehicle rolls over on to the rider, and unlike tractor roll bars, many ATV roll bars can be installed at home.

You can check out the original article here:

I was doing some research on different types of ATVs and came across this article on the Yamaha Rhino. Technically the Rhino is classified as a side-by-side vehicle and not an ATV, but they are used for some of the same jobs. While all ATVs/small ground vehicles present hazards that must be addressed, it seems like the Rhino is especially dangerous due to it’s design. The base of the Rhino is too narrow for it’s weight and height, which makes it prone to tipping over. Dozens of people have been injured and several have been killed. The main way these injuries are occurring is that the open side and top of the vehicle allows passengers to fall out during a rollover and then the vehicle, which weighs several thousand pounds, falls on top of them. Usually wearing a seat belt prevents passengers from being ejected, but in some cases even passengers wearing seat belts were injured because the catch on the belt didn’t work and the belt became too loose during the rollover. Yamaha has faced dozens of lawsuits over the Rhino, and documentation from the lawsuits has shown that they were aware of some of the design flaws before it was released. They have issued recommendations for making the vehicles safer like wearing seat belts and helmets, but no recall was issued.

If you have one of these vehicles, or a different brand of vehicle that has a similar shape (tall, with a narrow wheel base), the safest thing to do is probably to replace it with a model that is more stable. If replacing the whole vehicle isn’t possible, consider installing a new seat belt or side doors, especially in pre-2010 models. At one point Yamaha was offering customers side doors for model years 2006-2008, but I haven’t been able to figure out if the upgrade is still available for free. Seat belts, side doors, and covers that fully enclose the cab are readily available online, with prices ranging from around $50 for a seat belt kit to $700 for a deluxe full cab enclosure. Riders should always use seat belts and wear an ATV or motorcycle helmet.

`Additionally, you can take steps to prevent rollover by changing your driving habits. Try to avoid driving on slopes as much as possible, and if you do drive on slopes, drive straight up and down them rather than going at an angle. Avoid ruts that can cause one side of the vehicle to drop lower than the other. Don’t load anything on top of the vehicle since this makes it more prone to tipping over. Most ATVs and utility vehicles aren’t meant for on-road use or driving at high speeds, so make sure that you’re following the guidelines for the model you own.

ATVs and utility vehicles can help make your job easier, but it’s important to be aware of the general hazards of using them as well as problems caused by particular models. I think a lot of people who own these vehicles are aware that they’re prone to tipping, but hopefully sharing this article will help people realize how big the problem is and maybe some new ways of dealing with the problem. Stay safe out there!

Here is the link to the original article:

Here is an article I found on riding helmets. It’s produced by a group called Risky Head, which specializes in reviewing all kinds of helmets.  The article has reviews of their top 10 picks for riding helmets along with a buying guide. Wearing a helmet designed for riding reduces the risk of dying as a result of a fall by 70%-80% !!(Source)

They also have a top 10 guide for motorcycle helmets, which can also be used with ATVs. Wearing a motorcycle, motocross, or ATV helmet with a face guard reduces the risk for head injury by 64% (Source). 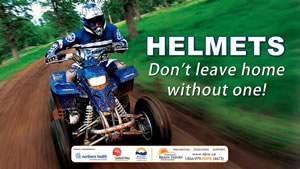 oday I’d like to present a case study involving a lone worker and a fall from an ATV.  The case comes from the Health and Safety Executive (HSE), an independent organization that promotes worker safety in the United Kingdom. Their website includes a few dozen agricultural injury case studies (click here to see their ag case studies).  I chose this case to take a look at ATV safety and some of the dangers of working alone on the farm.

The Situation: A 53 year old gamekeeper severely injured his pelvis by falling from an ATV. He survived the initial injury, but was unable to call for help. It took 52 hours for someone to notice that he was missing, and he was found dead 200 yards from the scene of the initial injury.(click here to see original case description)

Risk Mitigation Strategies:  There are two main issues involved here, which are the risks of operating an ATV and the risks of working alone.  Since this was a fatal case, they weren’t able to provide much of a description of what caused the initial injury. There are a lot of things that can contribute to ATV injuries: terrain, excessive speed, improper loading, mechanical issues, training issues etc. I found an article by OSHA that summarizes some of the main hazards of ATV use and how to avoid them. Click here to see it.

The other, and in this case possibly the greater issue is that he was working alone in an isolated area, had no way to call for help, and there was no check in plan to prompt a search when he didn’t come back. This incident took place in 2004, so cellphones weren’t as universal as they are now.  However having a cell phone doesn’t guarantee you’ll be able to call for help. Phone issues like low battery or poor signal can prevent you from making a call and if your phone breaks or if you’re unconscious as a result of the incident you won’t be able to call either.  That’s why the most important thing you can do is to avoid working alone whenever possible, and if you do work alone, let someone know where you’ll be and what time you expect to be back.  There are also a quite a few smartphone apps that can help protect lone workers. The systems use GPS to keep track of worker locations and can set up an emergency call button on the users’ phones. Some of them can also be set up to prompt users to check in by pushing a button on their phone at certain times, and call for help if the button isn’t pushed. Click here to see the top 10 lone worker apps.

The bottom line:  If you own an ATV, make sure that you and anyone else who drives it knows and follows all safety procedures. Try to avoid working alone as much as possible.  If you do work alone, let someone know where you will be and when you expect to be back. Cell phones can be a useful tool when working alone, but they can fail so make sure they’re not your only line of protection.